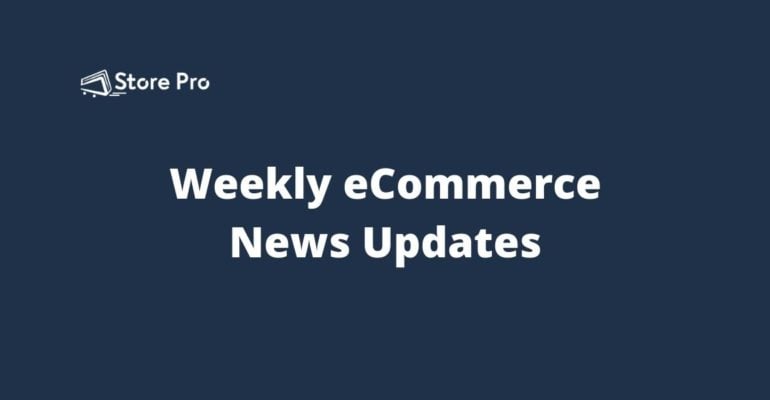 What’s happening in the eCommerce world?

We bring you the latest eCommerce news of the week.

Using a ‘buy-now-pay-later’ (BNPL) service is the fastest-growing payment method in the UK for a second year running, research from Worldpay found.

Currently, that equates to around £9.6bn in annual spending but, according to research in Worldpay’s Global Payments Report, that will balloon to £26.4bn by 2024, a whopping 10 per cent of all eCommerce payments in the UK.

“This research shows the speed and scale of the transformation in consumer attitudes we have seen over the last 12 months,” said Pete Wickes, Worldpay’s general manager for EMEA.

“We predict that the BNPL sector will not slow down – with the UK market seeing double-digit expansion over the next few years,” he added, pointing to BNPL usage currently growing at 29 per cent year-on-year.

“As this happens, it’s important that the frameworks that govern and protect consumers and merchants also adapt to ensure that there continues to be trust and reliability in payments technology.”

These “frameworks” are clearly front of mind in the BNPL industry at the moment, as the Government recently announced the services would be brought under the supervision of the Financial Conduct Authority given the potential for consumer harm.

Providers like Klarna, Zilch, Laybuy and Clearpay are all due to be impacted by these changes once they’re introduced.

Overall Worldpay’s data, which was collated from a survey of 46,000 consumers around the world and various B2B surveys, found that the UK’s overall eCommerce market is due to grow to £264bn by 2024, a jump of 37 per cent.
The figures suggest that the UK will remain the third-largest market for online transactions at least until 2024, behind China and the US but ahead of Japan, France and Germany.

IMRG Capgemini Online Retail Results for January reveal that UK online sales grew 74% year-on-year in January 2021, which is the largest rate of growth since the start of the first lockdown in March 2020.

Typically, online sales in January are fairly restrained as consumers recover from the Christmas shopping frenzy that occurs in November and December. However, a lockdown announcement for the new year caused a record-breaking growth in sales, with results also far above the 3, 6 and 12-month rolling averages – 46.4%, 44.9% and 41.3% respectively, according to analysis.

Omnichannel retailers were the biggest winners in January, seeing a 99.8% year-on-year rise in sales across their online channels compared to their online-only counterparts, which experienced a smaller (but nevertheless impressive) 31.2% growth. Meanwhile, mobile ecommerce sales soared 169.1%.

Data shows a multitude of categories benefitted from increased online shopping across the month, including health and beauty, which saw sales up 102% year-on-year, and beer and wine (up 105% year-on-year), despite many consumers partaking in the Dry January initiative. Electrical sales remained very high – up 206% – and there was even some promising news for fashion retailers as clothing sales grew 22%.

ShipBob, the leading cloud-based logistics platform for small and medium-sized businesses, today announced its first fulfillment center in the United Kingdom. In today’s convenience economy, this enables ecommerce businesses around the world to thrive within the UK by addressing their customers’ expectations of fast and affordable shipping.

With their latest international location, which is in very close proximity to the Heathrow Airport and major logistics hubs, ShipBob customers can reduce international shipping costs, improve the customer experience with shorter transit times while removing import duties and tariffs, and increase conversions for consumers in the UK market, which includes England, Scotland, Wales and Northern Ireland.

Analysts expect that Brexit will impact cross-border ecommerce in the UK, projecting a 7.3% decrease in 2021. Working with a global logistics solution with locations in the UK and the European Union ensures you’re able to fulfill your promise of fast and affordable shipping.

ShipBob is partnering with Royal Mail and DPD carriers, securing discounted shipping rates and fast delivery times. Using Royal Mail and DPD, the average transit time from ShipBob’s UK facility to the majority of the UK is 1-4 business days.

“Our mission is to democratize fulfillment for companies of all sizes around the world. We are excited to help direct-to-consumer brands expand their reach into the United Kingdom,” said Dhruv Saxena, CEO and co-founder of ShipBob. “Like our entire fulfillment network, our UK fulfillment center will be held to the ShipBob promise of reliable, fast, and inexpensive shipping with end-to-end transparency from one dashboard, managing all of our customers’ sales channels.”

“From our history through the years with ShipBob, it was a no-brainer to expand into other markets with them knowing that they have done their due diligence to meet the ShipBob standard,” said long-time ShipBob customer, Marc Fontanetta, Director of Operations of BAKblade.

Store Pro is a global e-Commerce technical support company. We specialize in helping individuals and businesses run successful, engaging websites. Currently, WooCommerce Support is our main focus. Other CMS systems are in the pipeline
Get Our Support Today
STATUS: Agents Operational
Login My Account
Launch Ticket Portal
Get Weekly Advice
Read The Blog
Privacy Policy
Terms and Conditions
Ask Us A Question
Plans
Careers
WooCommerce Support
WooCommerce Hosting
WooCommerce Development
Select the fields to be shown. Others will be hidden. Drag and drop to rearrange the order.
Click outside to hide the compare bar
Compare